You are here: Home / Articles / What Is A Well Plate? 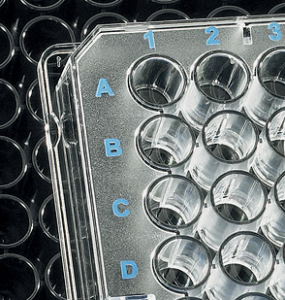 Well, What Is A Well Plate?

A well plate has many naming variations including, microplate, microwells, microtiter, and multiwell plates. The well plate is a flat plate that looks like a tray with multiple wells that are used as small test tubes.. The well plates are commonly manufactured in a 2:3 rectangular mix with 96, 384, or 1536 wells, although other cavity configurations are available. Some of the other sizes, far less common, available are 6, 24, 3456, and 9600 wells. The 96-well format is most commonly used well format since it can be used manually by a laboratory technician or researcher, although 96-well microplates are compatible with automated equipment. One of the more common uses of the 96-well format microplate is for the enzyme-linked immunosorbent assay technique (ELISA).

The well plate has become a standard tool in analytical research and clinical diagnostic testing laboratories¹. ELISA is very common and is the basis of most modern medical diagnostic testing in humans and animals. The wells of the microplate typically hold between tens of nanoliters to several milliliters of liquid. Microplates are extremely versatile and have become a standard tool in research laboratories.

Although microplates are made from a variety of materials, the most common material is polystyrene. Microplates are available in several color options including white pigmented, black pigmented and transparent. The various color options are an important consideration when performing  a particular assay. For example, the white pigmented microplates are ideal for optical absorbance or luminescence detection. The black pigmented microplates are well suited for fluorescent biological assays. Transparent microplates have excellent optical characteristics for colorimetric assays, but also find use in the fields of cell culture and storage. The physical properties of polystyrene (PS) make it an excellent choice for microplate construction. Polystyrene can handle wide variations in temperatures that are needed in various laboratory settings, such as cold storage at -112 Fahrenheit to thermal cycling applications where temperatures can fluctuate throughout the pre-programmed steps. Polystyrene plates also have the ability to contain chemical compounds for long-term storage. Other types of materials used in the construction of microplates include polycarbonate, cyclo-olefins (polypropylene), glass and quartz, although polystyrene is the most common material used in the manufacture of well plates.

Injection molding which is used for polystyrene, polypropylene, and cyclo-olefin is the most common manufacturing process. Vacuum forming is used when working with softer plastics such as polycarbonate. Composite microplates, more complex plates such as filter plates, SPE plates and advanced PCR plate designs use multiple components which are molded separately and assembled later in the manufacturing process.

The History Of The Well Plate

The microplate may seem unassuming on the surface but life without the microplate would probably be much different. Well plates are used in virology, serology, microbiology and a myriad of other life science and drug discovery laboratories.  The microplate is a simple, relatively low-tech, cost-effective, humble and unassuming tool found in labs across the world. The microplate saves time for the researcher as well as money on costly reagents which can be extremely expensive.

Send Me My Free Sample!